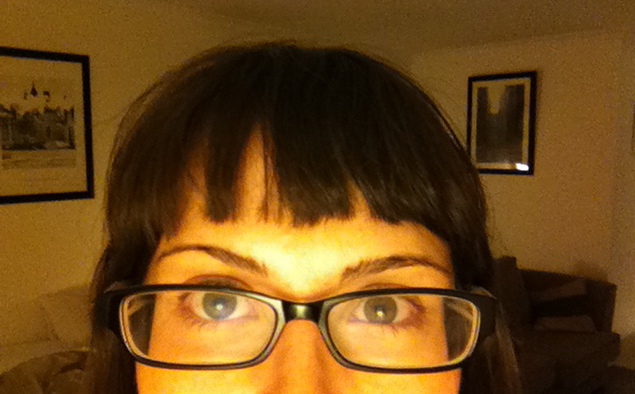 oops I did it again.  Yes, my friends I've subjected myself to yet another horrendous fringe trim and now resemble (yet again) Jim Carey from Dumb & Dumber. Perhaps I'm just a glutton for punishment or more likely it's because I'm just too cheap to go to a decent salon but despite what this looks like, it wasn't a 5 year old that cut my hair.  Believe it or not, the stylist was in fact rockin some really cool bangs. I was hoping to get a similar result but instead ended up with what appears to be a very poor attempt to capture the 'Amelie' look.  I've tried to convince myself that it looks a bit French but who am I kidding, it just looks plain ridiculous!  So lesson learned, next time I'll treat myself to a decent cut but let's face it, its only hair. Until it grows out, at least we can all have a few laughs at my expense.
Posted by Little Paper Trees

I think you still look awesome! I have mine pinned back again, as it was cut too short!! I am trying to grow it out, but supposedly it had to be cut shorter to get the shape I am after.

I promise that next time we have coffee I will have mine out.... we can rock short fringes together x

you're funny! doesn't look that bad methinks. i'm going to give you a tip that will change your life. ready?? call or text james nicholson (0406 728 298) & ask when he is next in sydney. tell him kate vernon gave you his number if you want to. he travels between melb, syd, perth & la & he is freakin awesome. just sayin. he doesn't charge if you just want your fringe cut in between normal cuts either. he is super friendly, calm & a generally lovely creative person. trust me! x captn

You are crazy! It does not look bad at all! I know this, because I actually cut my own damn fringe a few months ago and it looked hellish compared to yours! What on earth made me think that I, with zero hairdressing qualifications or experience, could cut my hair in anything resembling a straight line...

The dreaded fringe trim... Tell me about it.
I have just re-begged my friend to be my hairdresser again (She works for GHD full time and not cutting hair not)
You have got to go some where good and unfortunatly pay for it.... So frustrating for something that should be so easy and really shouldnt cost a thing I think...

Stop, you're cracking me up and I actually love a short fringe. I think you look great! Go shorter!! x

Love the fringe. Think short ones like that always look so cool. xx

ps. What size would you like the booties - newborn or 0-3 months xx

I love love your bangs!!!!!! And also, thank you for your sweet words and encouragement about following my dreams. XO!